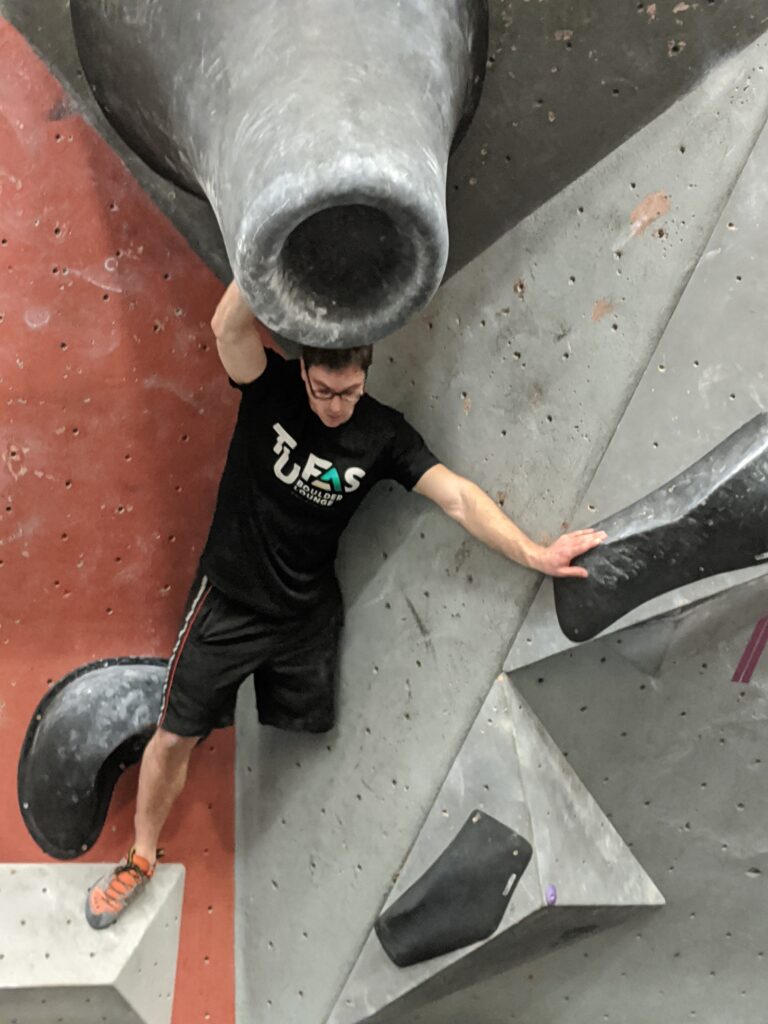 Travis Pollen was working on his Physics degree from Swarthmore College while training for the 2012 Paralympic Swimming time-trials. Now, having finished his Master of Science in biomechanics at the University of Delaware, Mr. Pollen is working to become Dr. Pollen as a PhD candidate in Rehabilitation Sciences at Drexel University. On top of that, Travis is also a NPTI certified personal trainer, with the “goal is to provide his clients with actionable fitness information through blogging, and in-person and online coaching.”

Oh, and he’s one hell of a rock climber.

I caught up with him the morning after the Adaptive Bouldering Competition at EarthTreks in Rockville, Maryland. (Full Disclosure: Tufas Boulder Lounge sponsored Travis at the Adaptive Bouldering Competition.) Adaptive bouldering competitions typically group athletes by their respective neurological or physical disabilities, including visual impairment. Travis had a first-through-third place podium finish – because he was the only one competing in his category.

“Out of 25 athletes – two were lower extremity amputees and I was the only man! I made out like a bandit!” Travis grinned, pointing to the Organic Climbing beanie on his head. Adaptive Bouldering competitions have no shortage of sponsors. Petzl and The North Face have taken on leadership sponsor roles in adaptive bouldering and sport climbing, backing the likes of Paradox Sports. Paradox, in turn, hosts clinics and provides on-the-job training for folks interested in becoming adaptive climbing coordinators.

“I never drink coffee,” he said when I offered him a cup of ReAnimator. Could have fooled me, I thought. Not because Travis Pollen is jittery or regularly sports bad breath from his morning joe, but because in his crystal blue eyes resides a robust and energetic intensity. He is animated, driven, and pauselessly witty.

It’s my understanding that he was born this way. In high-school, before adaptive bouldering fitness blogs and Instagram influencers, Travis went to the library (remember those?) and found the book Getting Stronger by Bill Pearl, five-time Mr. Universe. Soon thereafter, Travis started hitting the gym, focusing on his nutrition, and swimming almost year-round.

“Most people in high school are not doing that,” Travis added. I agreed. As a student, I cared more about cramming homework during study hall than whether or not our library had a section for the fitness-minded young adult.

“In college, I actually had a sign that said, ‘Please Be Quiet After Midnight – Travis is Trying to Swim Fast’” he laughs (probably because it worked – Travis is an American record holder in swimming). “Now, I’m a lot more mellow.” 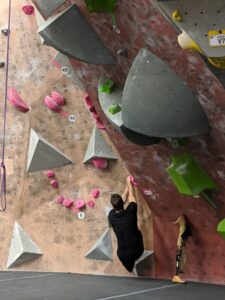 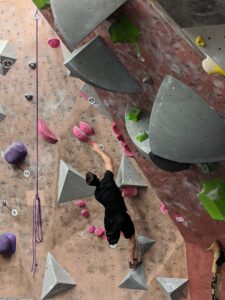 Mr. Pollen is forthcoming when he talks about his athletic journey. “I have to defend my dissertation in a few weeks. That’s getting grilled. Talking about myself is easy.” And to keep him from getting too comfortable, I ask about his academic career. “Rehab Science is a little what it sounds like, and a little not. What is it? It’s the research side of physical therapy, although I’m not a physical therapist.” Travis is a biomechanist – leveraging his talent in math and in physics with his passion for movement and experience personal training. “Since I got my MS in Biomechanics, I’ve moved into the exercise sciences. My dissertation is on risk and injury in swimmers.”

“My mom’s doctor told her to start swimming instead of walking because her knees are bad,” I told Travis, “she’s got a torn meniscus. Am I going to have to ask her to stop swimming?”

“No, no,” Travis warmly smiled and said, “The real risk is doing a ton of swimming. You want to avoid doing too much too soon.”

“Yeah – or doing a Couch to 5K. If you don’t run all week and start running every day leading up to the 5K – by the end of the week you already have shin splints. A common rule of thumb is adding 10% every week.”

I asked him to elaborate.

“And in climbing? or adaptive bouldering?” I asked.

“With adaptive bouldering and climbing it’s different – you’re constantly doing different movements. Kind of like a field sport. However, what is redundant is your grip. Your tendons don’t develop as quickly as your larger muscles. So – if you’re really psyched on climbing, and you climb every day, you might suffer a tendon overuse injury. It’s imbalanced.”

“And then you start taping!” I interjected, speaking from my own experience.

“Taping can be detrimental. If you’re taping, and you keep taping – you’re not allowing your injury to resolve. You’re not letting that strength build. Therefore, if you’re taping recklessly, chances are you’ll keep taping.”

This is what I came here for! I thought to myself. I mean, honestly, how often do you get advice from a climber who actually knows the science behind what they’re talking about? Rarely, dear reader, rarely. 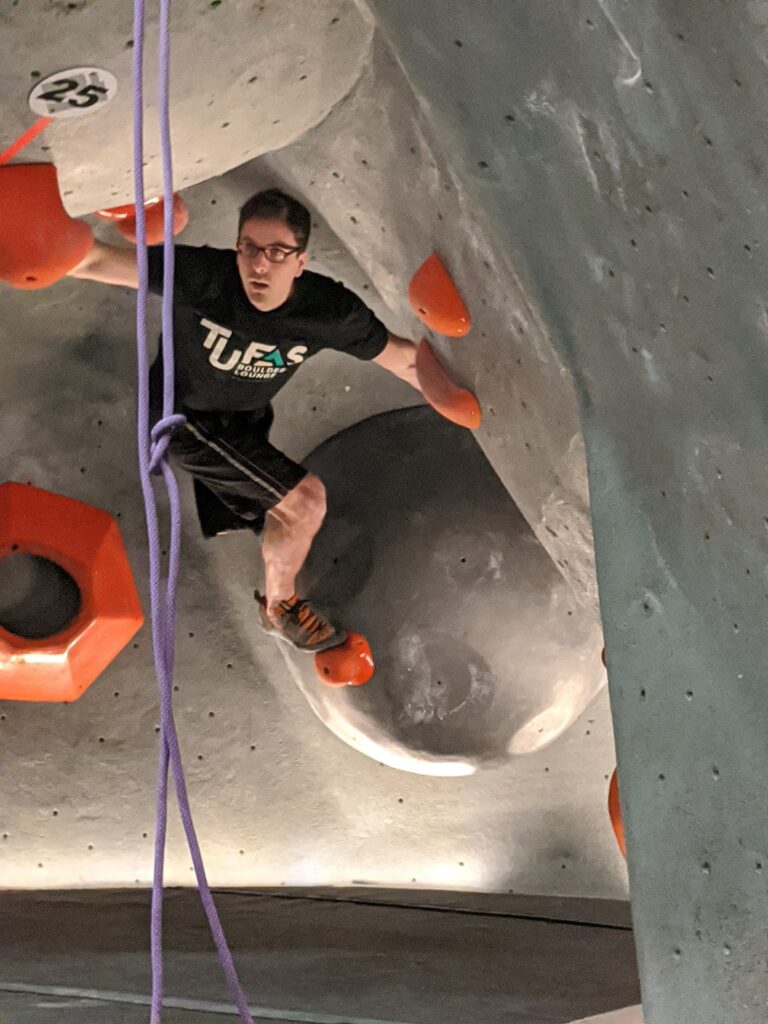 Travis Pollen is as interdisciplinary as his curricula vitae – transitioning seamlessly from swimming to statistics, to adaptive bouldering, to the psychology of what it takes to be a high-performance athlete. In 2017, after an unlikely substitute for the Eagles used his prior experience as a soccer player to replace the kicker (who had suffered a concussion), Travis wrote the following about the myth of early specialization:

“By concentrating on one sport year-round, we’re screwing our young athletes up. We’re robbing them of the chance to develop a more diverse set of movement skills. We’re subjecting them to the same stressors over and over for 50-plus weeks out of the year, which likely contributes to injury. We’re making them worse.”

He showcased interdisciplinary athletes like LeBron James and Allen Iverson. “Trying different sports develops your movement vocabulary. That’s the whole point of having kids try sports when they’re young anyway – it’s about teaching them to move, and to develop a belief in themselves that allows them to overcome obstacles.” And if they want to specialize and compete in a sport later in life, they’re capable of transferring those skills.

Ben Mayforth, a Maryland adaptive climber with VATER syndrome and instructor at Earth Treks, pointed to something rock climbing offers that other sports rarely do: “I think climbing, in general, is a sport about proving to yourself that you can actually do something,” Mayforth said in an interview with WTOP. “I’m always the type of person that just wants to prove to myself that I can go harder, stronger, faster, in all aspects of my life. For other people, it’s more about pushing the boundaries of what they truly can do.” Ben Mayforth actually climbed alongside Pollen during the adaptive bouldering competition, topping 12 out of the 15 problems.

In climbing, a part of the fun is working a project or a problem with a friend. Trying out the different beta, for example, or getting tips and tricks from other climbers. In Travis’ case – things are a little different. “You can see how they do it – but is it even possible for you?” 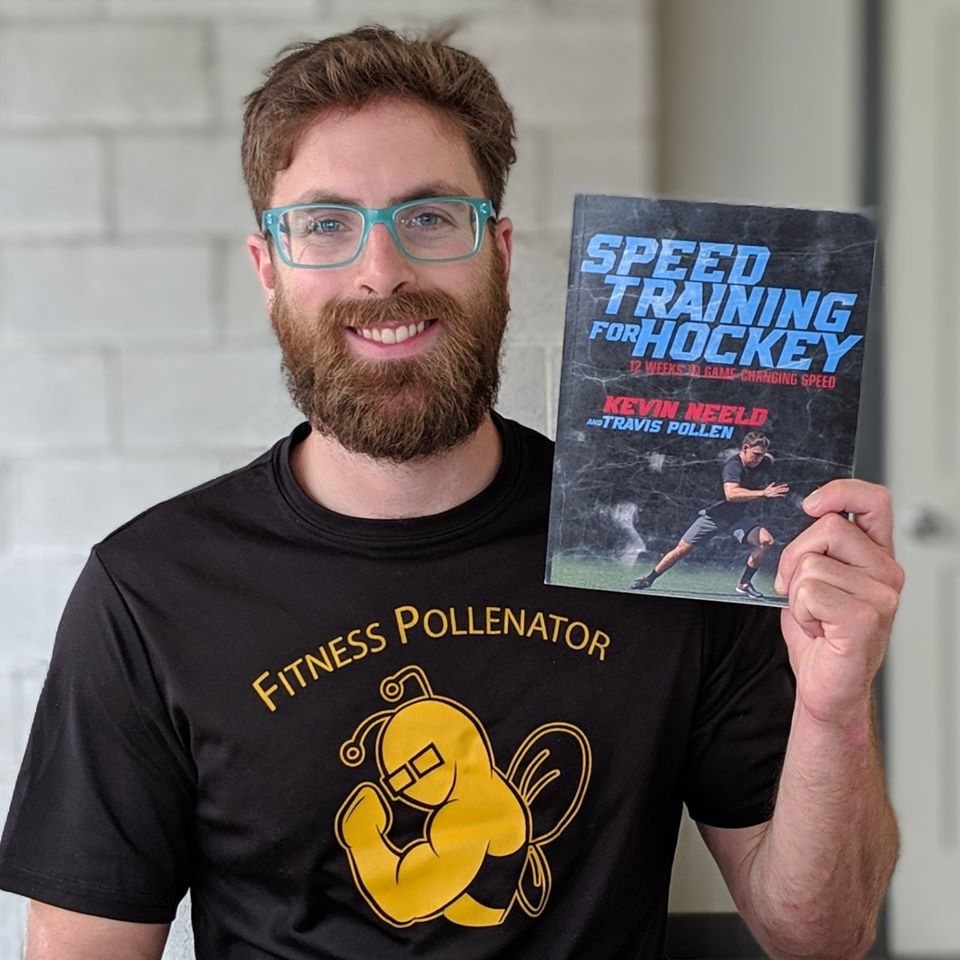 I asked Travis if competing changed the way he climbs and if climbing has affected his competitive nature. “Comp routes are so different,” Travis said, “I look at a climb on the vertical wall or the slab wall and think – ‘Nah, not gonna be good for me” or if a problem is graded out of my range or doesn’t seem in my wheelhouse. At the comp, we had to try all 15 problems. There were climbs I wouldn’t have tried normally that I ended up flashing.” Meaning Travis was able to top them first try.

As we wrapped up our sit-down, there was a question I couldn’t let go of. I thought back to young Travis in his dorm room at Swarthmore – maybe counting his macronutrients for the day or leafing through a primer on electricity and magnetism – and the sign on his door.

“Please Be Quiet After Midnight – Travis is Trying to Swim Fast.”

I wondered what Travis now had to say to Travis then. I asked Travis if he could go back in time and give advice to his younger self, what would he say?

“I’d tell myself to take it less seriously – though knowing me, I wouldn’t have taken that advice.”

You can read more about Travis Pollen on his website, FitnessPollenator.com. Also, check out his book, Speed Training For Hockey.