Send Global: Climbing Out of Depression

Climbing out of depression is more literal than it sounds. Recently, bouldering has been making headlines. No, not because of Olympic hopefuls entering into bouldering and sport climbing comps as Tokyo 2020 inches closer. Rather than the Sports section, bouldering is making headlines in Science and Health news.

Depression and anxiety have long been toward the top of the list of diseases in industrialized nations. Now, more than ever, individuals are looking to take charge of their mental health. It’s no secret that exercise can help battle anxiety, depression, and other mood disorders. However, for the first time, a recent study published by Dr. Laura Schwarz et. al., looked at the long-term effects of bouldering in particular on one hundred people being treated for depression and/or anxiety. The researchers came back with some surprising results.

Building on the research of Dr. Katharina Luttenberger of the Friedrich-Alexander-Universität Erlangen-Nürnberg in Erlangen, Germany, Dr. Schwarz and her team showed that an eight-week course of bouldering therapy was successful at reducing the symptoms of depression. Once a week, for three hours, participants would gather in small groups to practice a climbing technique. Then, they would have group therapy and then climb by themselves. The 8-week course was designed in conjunction with the Austrian Institute for Therapeutic Rock Climbing. Therapists built parallels between skills learned in climbing and skills used for mediating mood disorders. 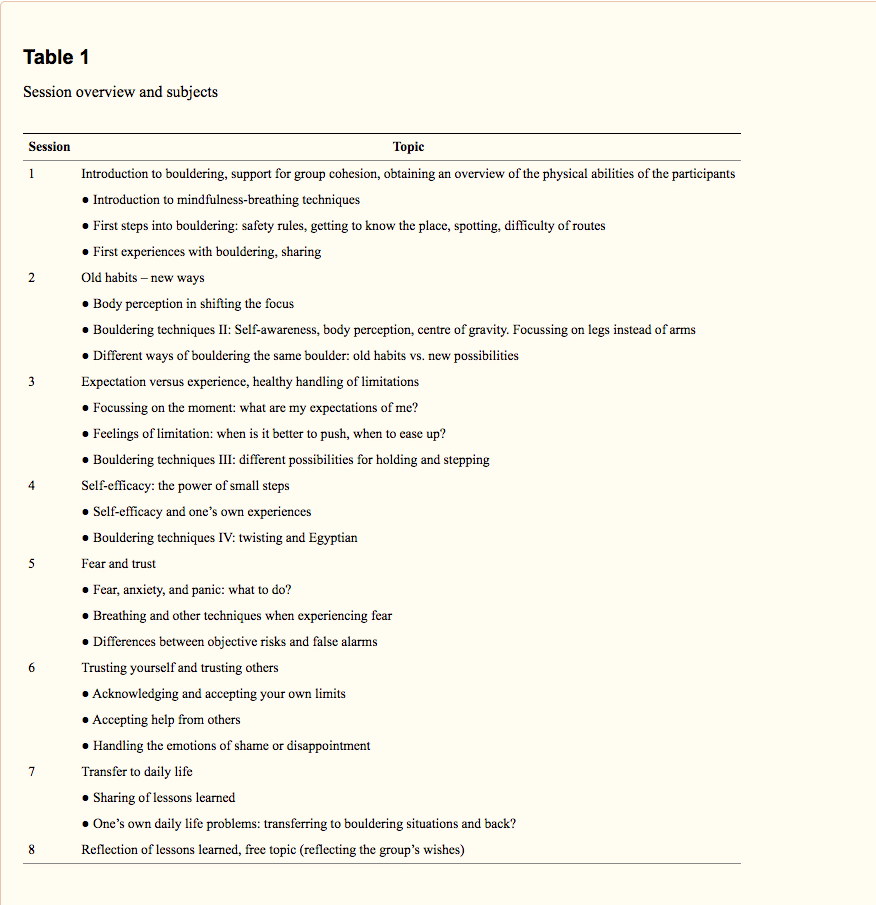 From weight-training to yoga, staying active been known to benefit persons with mood disorders. More specifically, group exercises, exercises where the individual is able to cater the difficulty of the exercise to themselves, and activities that require coordination have been shown to be the most effective. “Rock climbing or bouldering combines many of these aspects because rock climbing requires high concentration, can be varied according to the fitness level of the person, needs a high level of coordination, can easily be carried out in groups, and activates intense emotions (such as fear, pride, lust, anger, and more),” writes Dr. Luttenberger, “With the expansion of bouldering as a sport for everybody, it seems a logical development to use the positive aspects of bouldering as a therapy for mental illnesses.”

With skill drills that focus on mindfulness – like hands-free slab climbing drills – and demonstrations that link psychic concepts with climbing, the team of therapist-climbers achieved some spectacular results. According to the results of their study, participants reported a 6-point decrease in the Beck Depression Inventory – dropping from moderate to mild.

Rachel Fifer, the Director of Youth Programming at Tufas Boulder Lounge, resonated with the study’s findings. As luck would have it, I got to sit down with Rachel and discuss her experiences. “I absolutely relate to bouldering being an opportunity to practice mindfulness and focused presence. My mind often spins its wheels and bouldering is so engrossing – I can set aside that habit when I’m climbing.”

She pointed to the fingers buddy-taped on her hand, a sign of climbing injury, and continued, “I’ve found that my anxiety and depression have resurfaced since I’ve been injured for the past 4 months and unable to climb. It’s been incredibly disheartening to lose the physical and mental outlet that climbing provides. I’ve found that not only does it support emotional health, but with an intellectual opportunity to solve the puzzles of particular routes. On the other hand, not being able to climb has given me a concrete reason to prioritize self-care, because every time that I focus on healing my injuries gets me closer to my long-term goal of being able to climb again.”

According to the study, there are many ways in which climbing and bouldering give us tools to challenge anxiety and depression. For example, feeling stuck in life and on a boulder problem are not dissimilar: sometimes all it takes is seeing some new beta, gaining a new perspective, to move past the crux. In the same vein, understanding perceived risk and actual risk in bouldering can help the anxious mind move past the “what if something goes wrong” to “I know what do to if something goes wrong.”

In an interview with UANews, Eva-Maria Stelzer, a co-author of the studies and University of Arizona researcher, presented her own hypothesis as to why bouldering is uniquely effective in combating depression. “You have to be mindful and focused on the moment. It does not leave much room to let your mind wonder about things that may be going on in your life — you have to focus on not falling,” Stelzer said.

When I sat down with Hector Rico, known affectionately as Rico around Tufas Boulder Lounge, he was just finishing up his Intro to Bouldering class. His classes are legendary for being accessible and fun, especially for people with little or no climbing experience. He has a big, bright smile and captivating eyes. It’s hard not to be excited about whatever Rico is excited about – it’s infectious. I sat down with Rico and asked him if his experience with bouldering reflected the findings of the study.

Rico started climbing at the Great Western Power Co. in California, around the same time he was diagnosed with depression and anxiety. “I was working a high-stress job – very corporate. It was high stress, high demand, high anxiety combining with my own anxiety. I did not have the energy to make decisions, to be motivated, to even socialize.” The answer to Rico’s situation came in the form of his little sister who introduced him to bouldering for the first time.

Rico felt a difference immediately. “Despite the fact that it was a gym, it didn’t have all that macho [expletive] or ego behind it. It was communal.” Rico felt empowered by the members in the gym cheering him beginner bouldering problems, by the visceral experience of progress: “If you make a mistake, you know how to correct it. If you don’t know, then the community will help you.”

The precision of bouldering allowed Rico to silence the hounding voices of anxiety and disparaging thoughts of bouldering. “If you want to get to that next jug, that next move, that next crimp,” Rico laughed, “you have to be situated in the present.” This echoes the findings of the study as mindfulness was front and center of the Therapeutic Climbing approach.

There were other things that made climbing unique for Rico: the people around him were invested in his growth: “I used to surf, I used to skate, and people get really territorial, competitive and really toxic really quickly. Here, I don’t experience that.” While bouldering, Rico found that climbers simultaneously supported him and gave him space to explore and control his own progress.

I got to reflect on my experience with climbing during our conversation. I found that sometimes, bouldering did the opposite of help my mood. Projecting, ttrying the same problem time and time again, would turn from a meditative practice to another thing I just couldn’t get right. I would leave the gym feeling discouraged, and more depressed. I asked Rico if, since bouldering can come with times of despair as well as triumph, he ever felt like it wasn’t working for him – and what he did during those times.

“Whenever I start feeling frustrated, I go to a climb that boosts my morale,” he delivered with a chuckle.

Rachel shared a different perspective on projecting: “The routes I enjoy most are the ones that I can’t finish during an entire climbing session. The dedication required to make incremental progress on something is a sensation I love. Rather than feeling defeated when leaving after not finishing a route, I feel engaged.  Completing a climb after multiple sessions feels infinitely more satisfying to me than easily completing a climb in a couple of tries. These ‘failures’ show me that I’m truly challenging myself to grow. It’s the process that’s meaningful to me, rather than the speed of completion.”

When we wrapped up our interview, I noticed Rico still had his climbing shoes on. He’d kept them on for the last 90 or so minutes. I asked if he minded keeping them on for another hour and joining me for a quick climbing session. His face lit up. “Yes,” he said, “but first let me get some water.”

Z. Kudratov wrote this, among other things. They’re an imported Philadelphian with a soft spot for public transportation, public radio, and the PMA