If you’ve been to a climbing gym in the US, chances are you have seen the Yosemite Decimal System (5.1-5.X) on the roped climbing routes and the Vermin (V0-VX) grades on the bouldering problems. In this edition of On Sight, we’ll demystify climbing grades, and take a closer look at how a subjective sport like climbing tangles with the objective world of numbers and letters.

The Origins of Bouldering Grades

John Gill has a Ph.D. in complex analysis, a branch of mathematics, but you probably remember him better as the man who brought chalk to climbing. If you don’t know John Gill, well, you should. Aside from being the patron saint of chalk bags everywhere, John made bouldering a sport in its own right. Naturally, he was the first to introduce a grading system for boulders: The B-System.

On the other hand, we have John “The Vermin” Sherman. John Sherman does not have a Ph. D. in mathematics, or even a permanent residence to the best of my knowledge. Sherman does, however, have a very famous guidebook to his name—Stone Crusade: A Historical Guide to Bouldering in America. First published in 1994, the book contained the infamous V-Scale (V for Vermin) made its debut. Now, the V grades are just about the only bouldering grading system one encounters in the United States.

Despite their differences, John Gill and John Sherman both had reservations about grading climbs. Anticipating the “squabbles” over the subjectivity of bouldering, Gill wrote, “Reach, and body compactness would make the B-system absurd for occasional problems, and climbers of different strengths would dispute the grading.”

Sherman, famously, didn’t even include grades in the first draft of Stone Crusade.

At the urging of his editor, he would later crowdsource grades by consensus of other climbers at Hueco Tanks. He was careful to mention that a variety of factors influence grades and are not gospel. In his signature style, Sherman writes, “If all boulderers had the exact same physical characteristics (height, reach, hand size, strength, weight, flexibility, etc.), technical ability, mental parameters…then perhaps it would be my duty to unify America into one rating system.” But they don’t. Indoors and out, V grades are suggestions of difficulty fortified by consensus.

Taking advantage of the subjectivity of climbing, many gyms across the world have moved to grade climbs on a circuit. Borrowing from the circuit grading tradition of Fontainebleau, the modern system is about doing a series of boulders that have similar difficulty. This is done to round out a particular skill set, and build endurance and speed by climbing through the circuits faster each time.

The circuit grading system leaves wiggle room for the grading of each climb. At Tufas, for example, each circuit covers three grades, with an overlap between them: 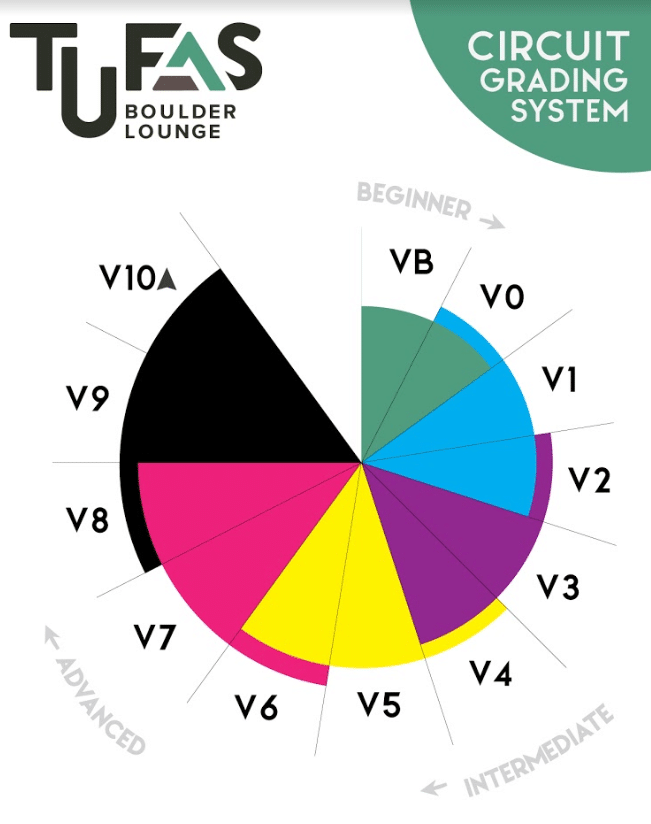 Furthermore, the circuit grading system puts the power in the climber’s hands by letting them assess the problem and judge the difficulty of a route for themselves. “Aside from being an outstanding training tool, the circuit grading system also encourages people to try different routes without psyching themselves out,” says Rory, our head routesetter. He adds, “They’re forced to look carefully and ask themselves, ‘where is the tough part? where does it get tricky?’ instead automatically writing a climb off just because it’s a number in either direction.”

For roped climbing indoors, a truncated version of the Yosemite Decimal System is typically used. The first number in the Yosemite Decimal System (YDS) refers to the class of terrain: Class 1: walking or hiking; Class 2: some scrambling and use of hands; Class 3: heavy scrambling; Class 4: heavy scrambling with a lot of exposure, falls could be fatal; Class 5: technical, roped, rock climbing. Class 5 climbs are further subdivided into the difficulty of the technical climbing. This subdivision is responsible for the second number in the YDS grade:

Outside of hold sizes, distances between holds, and angles of the walls, not too many things can measure the difficulty of an indoor climb. While there are certain techniques—toe hooks or drop-knees—that one wouldn’t expect on a beginner route, other aspects that shape the perceived difficulty of a climb can be pretty nebulous. Consider, for example, the level of commitment a move requires, or how tricky or intuitive the movement is.

It’s important to remember that outdoor climbing grades are a byproduct of their time, region, community, and history. A V5 climb on Haycock Mountain won’t be the same as a V5 climb in Mount Gretna, even though they’re less than two hours away from each other. Introduce the diversity of human bodies, strength, and flexibility, “mental parameters” (to quote John Sherman), and pretty soon, a V5 in Haycock doesn’t feel the same as another V5 in Haycock.

Z. Kudratov wrote this, among other things. He’s an imported Philadelphian with a soft spot for public transportation, public radio, and the PMA.